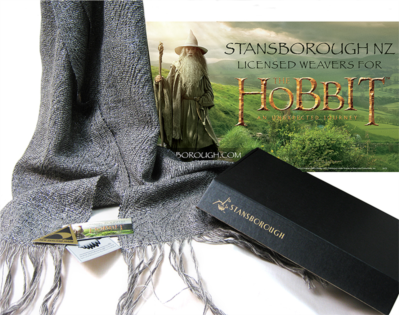 their own sheep breed by diversifying their farming activities on Stansborough, their New Zealand sheep station.
Over twenty years ago, they had no idea their achievements in this venture would eventually lead to their unique wool fibre being seen on cinema screens around the world. The fibre created by their flock of rare grey sheep was used to costume most of the main characters appearing in the blockbuster movies ‘The Lord of the Rings’. It was seen again in other major Disney productions, Narnia’s – The Lion, the Witch and the Wardrobe and Prince Caspian; along with the The Waterhorse, BBC’s Kidnapped, Avatar and many others. This New Zealand couple says that producing the fabric for the ‘Fellowship Cloaks’ and major costuming in ‘The Lord of the Rings’ movies was their ultimate challenge and their biggest achievement to date.

With a down turn in farming in 1991, Cheryl and Barry looked to diversify their Wairarapa hill country sheep and cattle farm. This lead to obtaining a small flock of grey sheep which is now a registered as a wool breed, “Stansborough Greys”.

Their flock of blue grey sheep now have wool that is unusually silky, soft and lustrous. This is the result of many years of selective breeding and hard work, producing a “Stansborough Grey” flock of over twelve hundred animals, the only ones of their kind in the world. The alpacas on the farm produce fibre which adds to warmth and a variety of other natural colours to many of the end products created at their weaving mill. When on display in New York, the unusual qualities of the “Stansborough Greys” fibre caught the eyes of the ‘Lord of the Rings’ costume designers and thus began their on-going involvement in the Movie industry.

To add to the processing of the Stansborough Grey wool, the Eldridge’s also own and operate a historic weaving mill in Wellington. The Eldridge’s oversee the shearing, hand sorting and grading of the fleece of each sheep. The yarn is then professionally worsted before it is processed at the mill. The looms, that came out to New Zealand in the early 1900’s , were developed in England in the 1890’s to make fine worsted textiles and are themselves masterpieces of design and engineering. These were among the very first commercial worsted looms manufactured, at the beginning of the Industrial Revolution, and have the ability to still create heirloom textiles from a bygone era.

The end products are natural, eco-friendly and sold all over the world in high end fashion stores and on the movie screen.

And now New Zealand's official gift to The Duke and Duchess of Cambridge and their daughter, the new Royal baby will be a selection of woollen baby items from Stansborough.