New Zealand has a rich history of farming.

Farming sheep for their wool was once the back-bone of New Zealand's economy.

The first sheep were introduced into New Zealand by Captain Cook in 1773. He had taken six sheep aboard at the Cape of Good Hope. Of these, only two (a ram and a ewe) survived to be put ashore at Ship's Cove in Queen Charlotte Sound. They were in poor condition and died three days later. Other sheep were introduced by whalers and missionaries and by the 1840's major flocks were successfully established. The first flock of any size was owned by John Bell Wright in the early 1830's on Mana Island near Wellington.

Many of the early sheep farmers in New Zealand were wealthy, well educated Englishmen who came to New Zealand to create new estates. Land was cheap enough to buy but sheep cost a great deal.

One of the early sheep farmers in New Zealand was John Acland. He had studied mathematics and practised law in London before arriving here in 1855. John worked as a farm cadet and labourer to gain the experience he needed. By 1895 with Charles Tripp he had a 40,000 hectares farm in Canterbury with 51,000 sheep. In the 1840's thousands of sheep were brought to New Zealand from the thriving flocks in Australia so that by 1894 New Zealand had nearly five million sheep.

Originally sheep had only the native grasses of the lowland areas on which to graze. The pioneer farmers set fire to the native tussock from time to time because the sheep liked the sweet new growth of tussock, thereby keeping it down. After a time additional pastures were prepared by felling forests. Today top dressing planes and heavy machinery are used to sow seed and spread fertilizer on the hills. Where once pioneer farmers used bullocks to plough the land and to clear scrub.

The one thing that our sheep farming ancestors and our farmers of today still have in common, is the weather. Through the nor' west winds, snow storms that have killed sheep, floods that have drowned the land and droughts that have dried the pastures this will always be the same as it was many years ago as the first hardy men and women began farming the land. The weather will always be the first topic discussed over a cup of tea.

Sheep have declined to around 30 million sheep in New Zealand where as 30 years ago numbers were approximately 70 million. The number of sheep out weigh human population in New Zealand and there are around seven sheep to every person. Today our sheep numbers are declining with many farms been broken into smaller farms or sold. A major shift to dairy farming has seen many sheep farmers sell their sheep and convert their land to cows and milk production.

A sheep farming way of life has been handed through our generations and today remains the strength behind sheep and wool. Farmers' drive for producing better quality wool has always been the goal over many generations and that will never change. 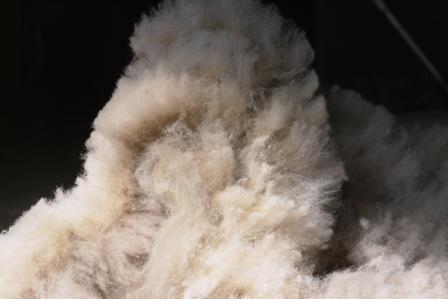 Off the sheep' back - New Zealand wool