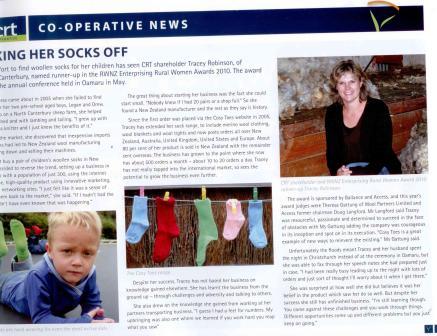 children has seen CRT shareholder Tracey Robinson, of Rotherham, Canterbury, named runner up in the RWNZ Enterprising Rural Women Awards 2010. The award was part of the annual conference held in Oamaru in May.
Tracey's business came about in 2005 when she failed to find woollen socks for her two pre-school aged boys, Logan and Drew. Being brought up on a North Canterbury sheep farm, she helped in the shearing shed and with lambing and tailing. "I grew up with wool, Mum was a knitter and I just knew the benefits of it."
Researching the market, she discovered that inexpensive imports of synthetic socks had led to New Zealand wool manufacturing businesses closing down and selling their machines.

"You couldn't buy a pair of children's woollen socks in New Zealand." She decided to reverse the trend, setting up a business in a rural township with a population of just 300, using the internet to supply a niche, high quality product using innovative marketing, including social networking sites. "I just felt like it was a sense of duty to bring them back to the market," she said. "If I hadn't had the children I wouldn't have even known that was happening."

The great thing about starting her business was the fact she could start small. "Nobody knew if I had 20 pairs of socks or a shop full." So she found a New Zealand manufacturer and the rest they say is history.
Since the first order was placed via the Cosy Toes website in 2005, Tracey has extended her sock range, to include merino wool clothing, wool blankets and wool tights and now posts all over New Zealand, Australia, United Kingdom, United States and Europe. About 80 per cent of her product is sold in New Zealand with the remainder sent overseas. The business has grown to the point where she now has about 500 orders a month - about 10 to 20 orders a day. Tracey has not really tapped into the international market, so sees the potential to grow the business even further.

Despite her success, Tracey has not based her business on knowledge gained elsewhere. She has learnt the business from ground up - through challenges and adversity and talking to others.
She also drew on the knowledge she gained from working at her partners transport business. "I guess I had a feel for numbers. My upbringing was also one where we learned if you work hard you reap what you sow."

The award is sponsored by Ballance and Access, and this year's award judges were Theresa Gattung of Wool Partners Ltd and Access former chairman Doug Langford. Mr Langford said Tracey was resourceful, passionate and determined to succeed in the face of obstacles with Ms Gattung adding the company was courageous in its inception and spot on in its execution. "Cosy Toes is a great example of new ways to reinvent the existing," Ms Gattung said.

Unfortunately the floods meant Tracey and her husband spent the night in Christchurch instead of at the ceremony in Oamaru, but she was able to fax through her speech notes she had prepared just in case. "I had been really busy leading up to the night with lots of orders and just sort of thought I'll worry about it when I get there."

She was surprised at how well she did but believes it was her belief in the product which saw her do so well. But despite her success she still has unfinished business. "I'm still learning though. You come against these challenges and you work through things. Different opportunities come up and different problems but you just keep on going."