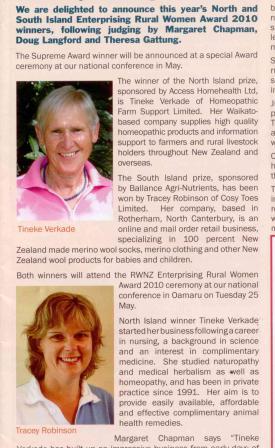 The supreme Award winner will be announced at a special Award ceremony at out national conference in May.

The winner of the North Island prize, sponsored by Access Homehealth Limited, is Tineke Verkade of Homoeopathic Farm Support Limited. Her Waikato based company supplies high quality homoeopathic products and information support to farmers and rural livestock holders throughout New Zealand and overseas.

The South Island prize sponsored by Ballance Agri Nutrients, has been won by Tracey Robinson of Cosy Toes Limited. Her company, based in Rotherham, North Canterbury, is an online and mail order retail business, specialising in 100 percent New Zealand made merino wool socks, merino clothing and other New Zealand wool products for babies and children.

Both winners will attend the RWNZ Enterprising Rural Women Award 2010 ceremony at out national conference in Oamaru on Tuesday 25 May.

North Island winner Tineke Verkade started her business following a career in nursing, a background in science and an interest in complimentary medicine. She studied naturopathy and medical herbalism as well as homoeopathy, and has been in private practise since 1991. Her aim is to provide easily available, affordable and effective complimentary animal health remedies.

Margaret Chapman says "Tineke Verkade has built up an impressive business from early days of scepticism and little belief in alternative methods of healing from the farm community."

Nowadays more than a quarter of Fonterra dairy farmers and many sheep and beef producers use homoeopathy.

South Island winner Tracey Robinson set up her Cosy Toes business after experiencing frustration that wool socks were not available for her two pre-schoolers. Researching the market, she discovered that inexpensive imports of synthetic socks had led to New Zealand businesses closing down and selling their machines.

She decided to reverse that trend, setting up a business in a rural township with a population of just 300, using the internet to supply a niche, high quality product using innovative marketing, including social networking sites.

Judge Doug Langford says Tracey Robinson is resourceful, passionate and determined to succeed in the face of obstacles. Theresa Gattung adds "Cosy Toes is courageous in its inception and spot on in its execution. Cosy Toes is a great example of new ways to reinvent the existing."

Cosy Toes products are now posted all over the world, and Tracey has gone on to support those less fortunate, including organising the Cosy Toes Sock Drive for orphans in Uganda.

The judges were impressed by the high standard of all the entries in this year's Enterprising Rural Women Award, reflecting the resourcefulness and 'can do' attitude of rural women entrepreneurs, who are growing their businesses and looking for new ways of marketing their products in these challenging economic times. 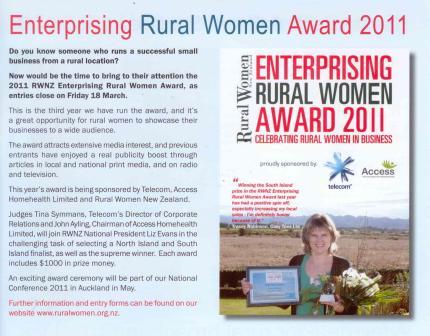 based company specialising in merino wool socks and clothing for children.

Sadly the floods meant Tracey was unable to reach the ceremony to receive her prize which was sponsored by Balance.
However, she says the Award has had a positive spin off already, especially in terms of recognition from the rural community, where she's been in demand for speaking engagements, as well as increasing her local sales. "I'm definitely busier because of it."

The passion continued the following day when Theresa
Gattung of Wool Partners International spoke about her work raising awareness in the USA and other international markets of the wonderful properties of New Zealand strong wools, especially for carpets.